When I was the age of our Activity Day girls, I didn’t have much of a concept of what Veterans Day or Memorial Day were all about (besides being a day off from school!). I thought that this activity would bring a little big of understanding and respect for World War II and our American military holidays.

1. Ask the girls what they know about World War II. Then, fill in the things they don’t know or don’t remember. (I found this site to be a very helpful review even for myself!)

2. Ask what they think it might have been like to be a young girl during World War II.

3. Explain what life was like in America during World War II. There were rations on food, clothing, and gasoline. Since men were overseas fighting for their country, many women began to work, to earn money for their families and also to help with the war effort. That’s where the “Rosie the Riveter” artwork comes from. (Show image.) 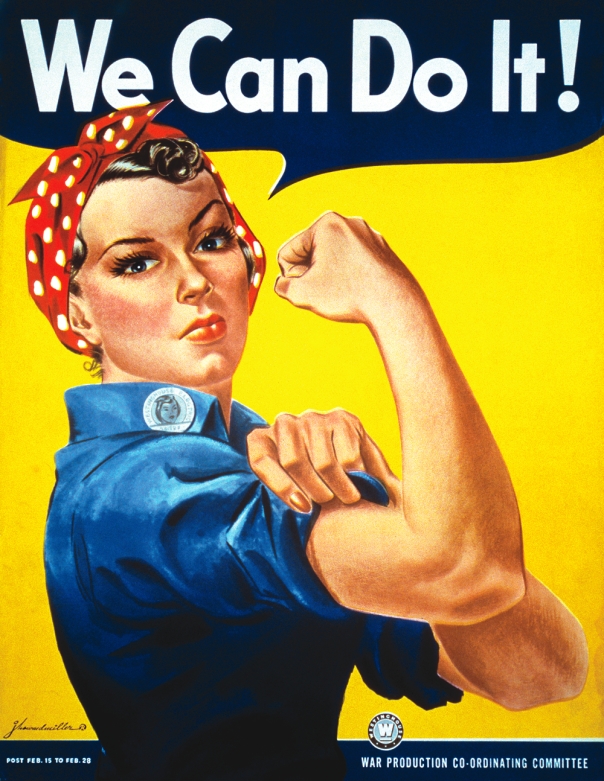 4. Ask the girls to share their thoughts again about what life might be like as a young Mormon girl in America during World War II. Share this news article and discuss how these girls helped their community. (If you live outside of Utah you may need to describe the collection of fast offerings to them!) 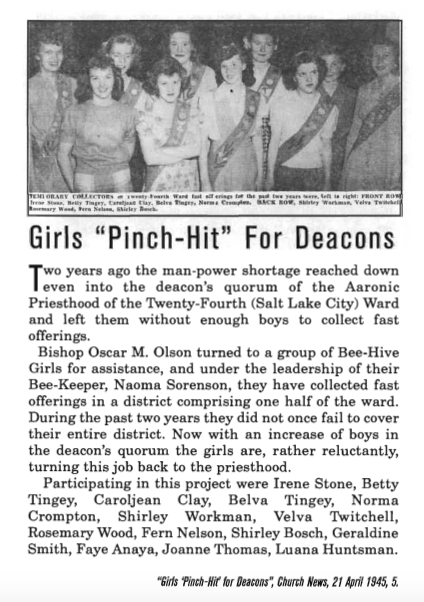 5. Share this quote from LDS.org: “The Church sponsored special wartime programs and in other ways encouraged its members to patriotically support the war effort. The first Sunday in 1942 was designated as a special day of fasting and prayer. As they had done during World War I, the General Authorities again commended the Saints for their generous contributions to the Red Cross and other charitable funds. Women in the Relief Society put together first aid kits for home use and prepared bandages and other supplies for the Red Cross. During the winter of 1942–43 the Church’s twelve- and thirteen-year-old Beehive Girls donated 228,000 hours, collecting scrap metal, fats, and other needed materials, making scrapbooks or baking cookies for soldiers, and tending children for mothers working in defense industries. A special ‘Honor Bee’ award was offered for such service. Then in 1943, Mutual Improvement Association youth in the United States and Canada raised more than three million dollars to purchase fifty-five badly needed rescue boats to save the lives of downed airmen.” Ask the girls which of the efforts listed sound like something they might do to help with the war effort.

6. Explain that most of the fighting of World War II (save Pearl Harbor) happened outside of the United States. Ask them what they think life was like for girls in Germany.

7. Share what you know of Anne Frank’s life. Show them a copy of The Diary of Anne Frank and/or watch the short video about her life. Discuss.

8. Ask the girls if the knew that there were Mormons in Germany during this time. Explain that just like many men and fathers in the United States were off at war, in Germany there were also a lot of men at war. Ask them how they think church might be different without Bishops to preside, or young men to pass the sacrament. Not only did German girls women collect fast offerings and tithing for the men, in some cases in Germany, the women also blessed and passed the sacrament! (If you’re interested, this story is documented in this book.) You may want to use this story as a jumping off point for talking briefly about the importance of the sacrament, even/especially when times are hard.

9. Show the LDS Video, Spiritual Vertigo. This video is packed with many different themes and lessons that you might choose to discuss when the video is over.

10. Finish with the Rosie the Riveter craft you have chosen.